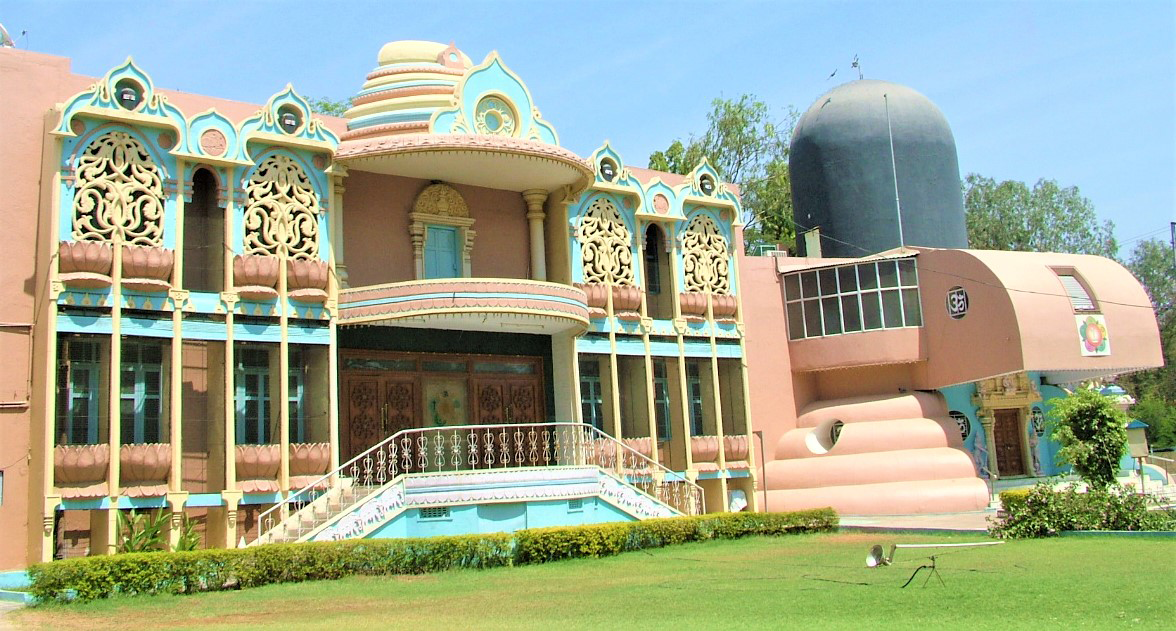 On 4th April, 1973, the Telugu New Year Day, Swami arrived at Hyderabad along with a group of students of the Brindavan College.

Swami arrived at the new building, ‘Sivam,’ at 4.30 pm that evening; ‘Sivam’ was built in the shape of a Linga, and was meant to serve as Swami’s residence during His stay at Hyderabad. He hoisted the Prashanti Flag in the building to mark the inauguration of Sivam. Prof. Gokak described Swami’s recent tour of Bombay. Swami followed this up with His discourse.

"Karma (activity) is primarily movement, motion. Movement results in energy and matter is but condensed energy. Ether, air, fire, land, water - all are the cause as well as the consequence of this incessant movement. All things that move are active, engaged in Karma. To live is to change, to move; you may not move the entire body or any of its parts, but still, movement is taking place in you. Food is being digested, blood is being circulated, air is being drawn in, analysed, absorbed and exhaled, impressions are welcomed or resisted and conveyed or rejected. Life is Karma; the Body is a Karma-Kshetra (abode of activity). All living things are engaged in Karma offering themselves in sacrificial rite of ceaseless activity. The fruit of that Sacrifice is Self-realisation.

When you have your eyes open, you see thousands here; when you close them, they are not here! Or, if your sight is impaired, you don't see them. You cannot therefore say, they are non-existent. Since your sight is impaired by doubt, pride, or prejudice you don't see God, who is in you as well as outside you. You long for a thing that is not; you ignore the treasure that is within your grasp. You swear you have no bird in your hand; you struggle for the birds, that you believe, are waiting for you in the bush. The bird in the bush is only the image of the bird you have in your hand but you are unaware of this truth.

Be happy when grief strikes you

Yanna Bharati Thanna Bharatam: (What is not Indian is not knowledge; all knowledge is the domain of the Indian intellect.) And all knowledge is synthesised, harmonised and summarized into the highest Wisdom, here, so that its alchemy can be experienced. And what is that Wisdom? Every individual is a spark of the effulgence of God; God is dancing in every cell of every being. Do not doubt this, or ignore this, or dispute this. This is the Truth; this is the entire Truth; this is the only Truth. The Universe is God. (Loka is Lokesha). All this is He, His Body.

To run away from the place which you have been assigned is cowardice, it is foolish, it is fruitless. Don't honour such men as heroes. You can be engaged in any profession, employed in any job, for all professions are His, all jobs are His. He is the Universal Master, the Universal Provider. And when troubles pile up or disappointment confronts you, be thankful for the toughening it gives to your character for the trial which you are privileged to face. You overcome the distress of the heat by resorting to a cooler; you overcome the distress of freezing cold by resorting to joy. Be happy when grief strikes you. Be calm when anger tries to inflame you. How can you put down fire with fire? Reason out and convince yourself that tolerance, forbearance, love and sweetness can alone ensure peace for yourself and for society."

The holy week of Shiva Puja was initiated on 5th morning, and Swami created a Shiva Linga for worship at Sivam. Swami gave Darshan and Discourses to thousands of devotees everyday from the 5th to the 12th. The gathering was also addressed by His students. On 12th, Sri Rama Navami Day, the Holy week of Shiva Puja came to an end with the valedictory offerings.

Swami created a rosary of gems for the high priest. That evening, Sri Khandubhai Desai , Governor of Andhra Pradesh, presided over the Rama Navami celebrations and Dr. B. R. Amarendra addressed the gathering prior to Swami’s Discourse. During Swami’s stay at Hyderabad, Swami Karunyananda, and the Minister Sri T. A. Pai spoke at the meetings. Swami left Hyderabad on 15th April.