The Sri Sathya Sai Central Trust is dedicated to the cause of moving to a renewable source of energy, especially given the quantum of power needed to run its major projects for public welfare in the areas of education, healthcare and general public utility. 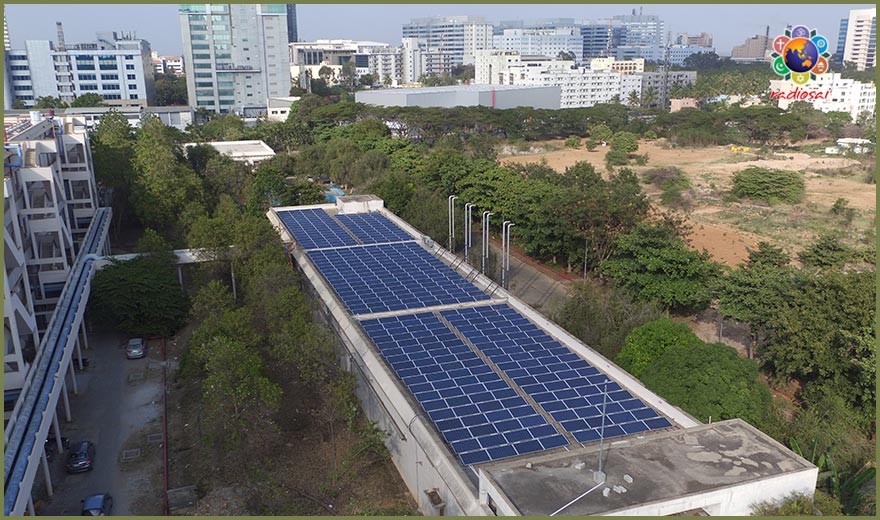 First steps at the Whitefield hospital

In January 2017,  the Trust took a ‘green leap’ and set up its first 100 kWp solar power plant in the Sri Sathya Sai Institute of Higher Medical Sciences, Whitefield, Bengaluru. In 12 months, it generated 1,40,000 units of energy. Recognising the charitable work of the hospital, the government raised the subsidy to offset the rising power tariffs.  However, this has in no way diminished its zeal to go for clean energy as well as conserve every bit it can.

On a war footing, it replaced its entire lighting system with 3000 LED tube lights, thus bringing down the lighting power load by 60%. Similarly, it changed the motors and the ducting of its air-conditioning system which reduced the power requirement of the ICUs by 40%. Thanks to these little steps, the hospital was amply ‘green rewarded’ – it saved up to 10,000 units of energy every month. Its renewable energy production and its power conservation measures prevented 127.5 tons of carbon emission into the atmosphere.

Buoyed by the tremendous success of the Solar project in the Whitefield hospital, the Trus,t in 2018, set up a project which was 10 times bigger. This was a 1 MWp (1000 kWp) solar plant at Sri Sathya Sai Institute of Higher Medical Sciences in Prasanthi Gram.  This resulted in the reduction of the power bill by one-third.

In an effort to preserve the unique architectural structure of the roof, a site-specific design that avoids penetration was conceived, wherein the roof is not drilled to put a bolt to fix the panel, but a design that created a ballast structure, cast it down and then anchored the panels on top of it.

The next big effort was to build an 800 kWp solar plant for meeting the power needs of the new scientific edifice in Puttaparthi – the Central Research Instruments Facility. While panels for 350 kWp could be accommodated on roof surfaces of various structures, another 450 kWp had to be done on the ground. To avoid cutting of trees, it was decided to convert the hillock behind the Research Facility into a solar farm. It was a barren and rocky surface with no vegetation but it had a steep 45-degree slope. The solar panels however needed a 15-degree slope. The Trust took this up as a challenge to mould that hill into three tiers with solid retaining walls so that at every level panels could be set up with the right inclination needed. 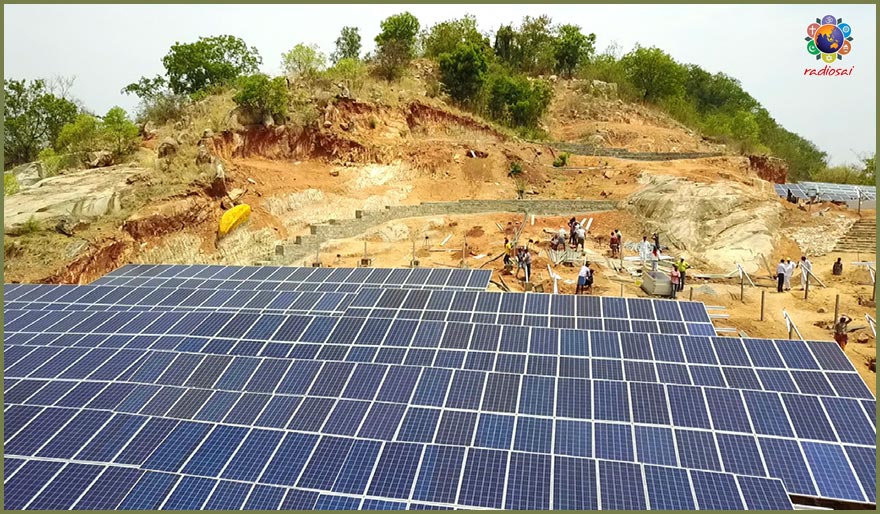 Largest installation by a charitable Trust

The solar power project is one of the largest installations of solar panels by a charitable Trust. The first two phases of the solar power project, totaling to a capacity of 4800 kWp have already been commissioned. The third phase, adding another 1300 kWp is expected to be commissioned by March 2020, taking the total installed capacity to 6100 kWp. This is expected to generate a cost savings of upto 50% on the power bill incurred by the Trust.