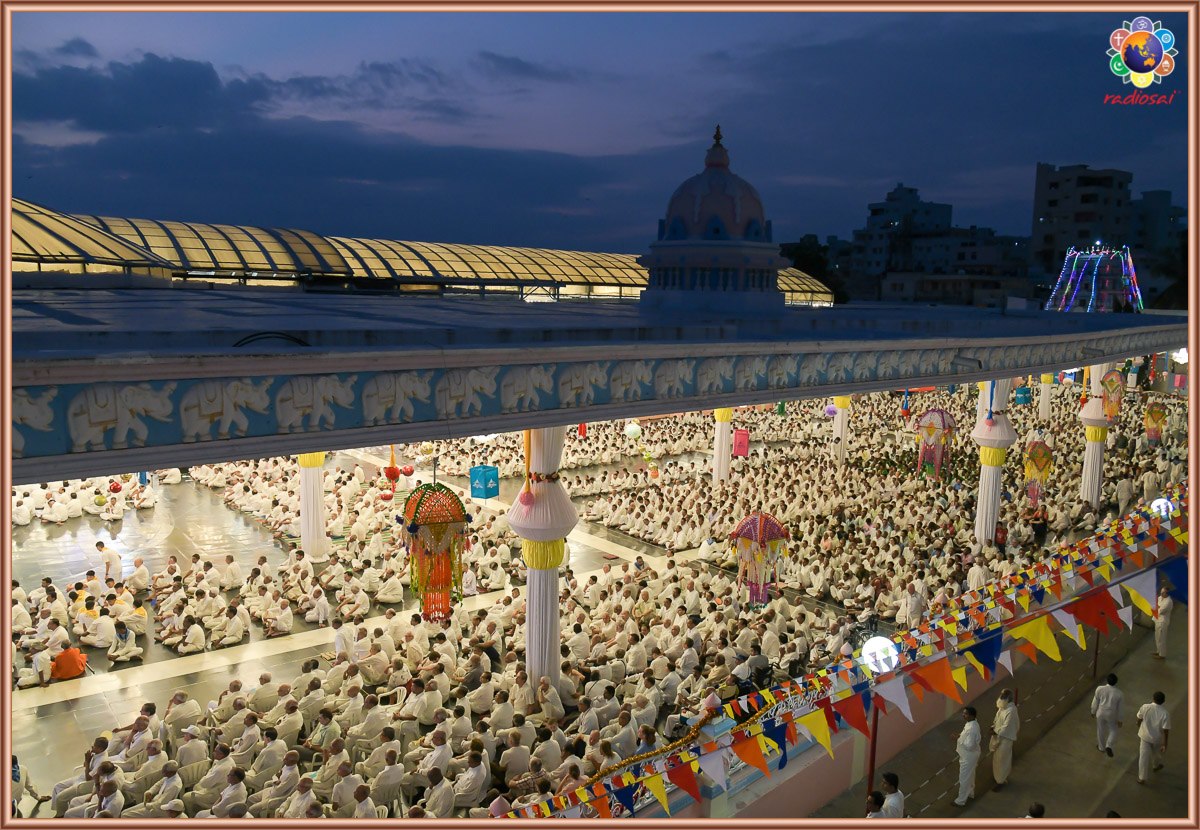 Seldom does man recognises the painstaking efforts of The Creator Supreme who, in His love that conquers, descends Himself in human frame, acting out in the worldly stage only to help him to ascend. Illustrious Avataric lives, be it from the Treta or from the Dwapara or that of Sri Sathya Sai Baba in the eternal now, His story is always synonymous to Love,  pure Selfless Love! How many of us do know the fact that Sri Sathya Sai Baba has condensed the wisdom of entire creation and beyond in 15 Vahini series, painstakingly penned by His Divine Hands, for long 26 years, all out of His Love…Love…Love!!! When an earnest seeker understands this pain, he is almost there, for such understanding comes from greater awareness, which in turn drives him to His True Truth.

In its eternal pursuit to reach out the mankind with the ‘wisdom’ handed out by Beloved Baba, Sri Sathya Sai Seva Organisations – India announced yet another golden chapter today, announcing the launch of Vahini Swadhyaya(sacred reading). The session commenced with a Vahini procession to the backdrop score of ‘Sri Sathya Sai Vahini Mahima…’ heralding the ‘advent’ of the Vahinis. After a brief introduction on the session, Sri Sanjay Sahani, Controller of Examinations took over, speaking on the theme – Vahinis – Baba’s Gift To Humanity. Connecting the dots, speaking of His unparalleled love that manifested in the form of Vahini series through the Sanathana Sarathi for long 26 years, the speaker had a single prayer to the august assembly, that “if you want to be a shareholder (in His mission), read the Vahinis.” Vahini is an emanation, from The Divine Supreme, and thus is Veda ItSelf, affirmed the speaker. Narrating his own experience of participating in a year-long study circle dedicated to the Vahini Series, he emphasised the absolute importance of Vahini Swadhyaya, advocating the same for one and all.

Dr. Srinivasan Srirangarajan, formerly Controller of Examinations at SSSIHL, currently Associate Professor with the Dept of Management Studies, spoke next, delving in detail on the role of His chosen instrument Prof. N. Kasturi, who was a connoisseur with many pens in his pocket. Briefing the story involving Prof. Kasturi’s entry into the ‘Sai fold’, Srirangarajan lucidly narrated how Prof. Kasturi would get the articles from Baba well in time for publishing in the ensuing issue, how he would fulfil his task of transcribing, translating, compiling, and later supervising the printing and publishing to despatch the same to over 3000 destinations, facing oddities galore. We should be primarily grateful to Baba for the His Love in the form of Vahinis and then to His chosen instrument Prof. N. Kasturi, concluded Srirangarajan. A comprehensive presentation on the Vahini Swadhyaya followed next, participated by four of Baba’s alumni, Amey Deshpande, Bishu Prusty, Prem Anush and Aravind Balasubramaniam. The presentation with talks and narrations and question answer sessions spoke on Baba in His role as The Supreme Teacher of Truth, how the Vahinis are different from the Sathya Sai Speaks, how various Vahinis have influenced the human hearts, etc, heralding aloud that Vahinisare the quintessence of His Wisdom, granted to mankind by His Love That Conquers.

All India President Sri Nimish Pandya then formally launched the National Vahini Swadhyaya programme, which according to him will run for the next five years, with en masse participation from devotees. Indeed, for The Lord Supreme Who has granted His  such precious, priceless time, we need to give our best, our time back unto Him, in gratitude. A Telugu theme song on the event followed next, ‘Anandam…Anandam…Prema Vahiniye Motadaanandam…’, a song by Baba HimSelf. Sri Brijesh Bamalwa served as the master of ceremonies for the session. Bhajans continued and the session concluded with Mangala Arathito Baba. 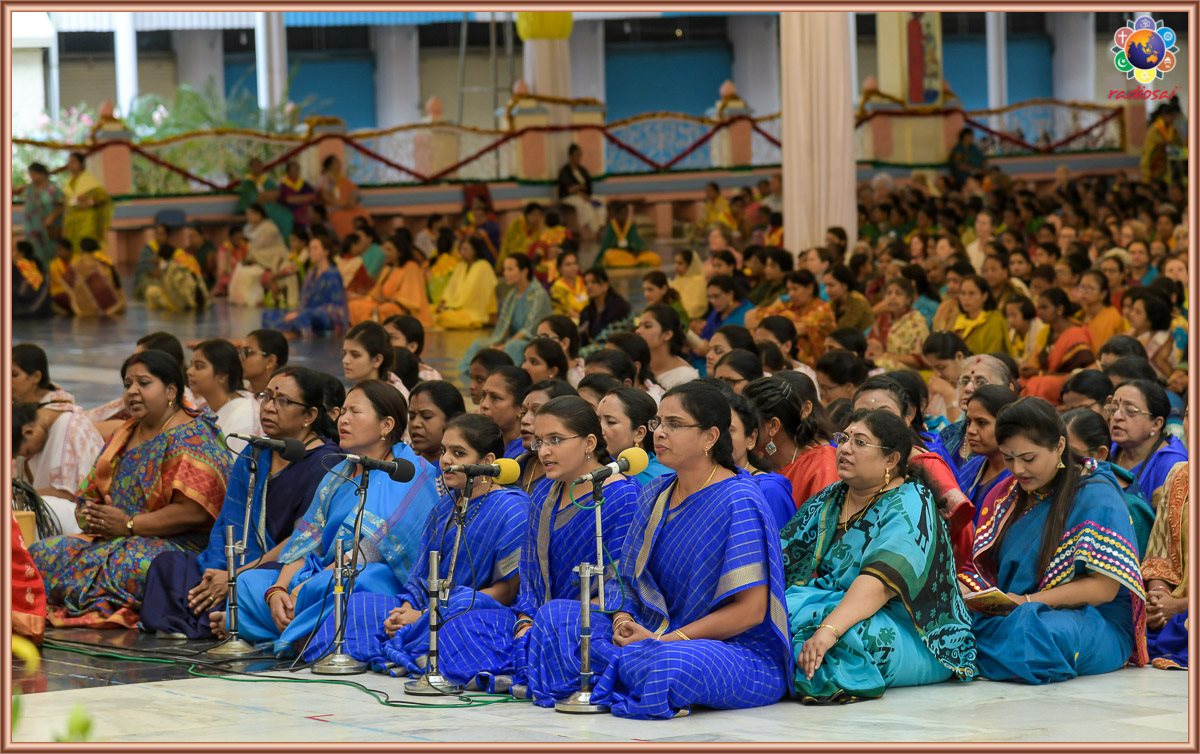 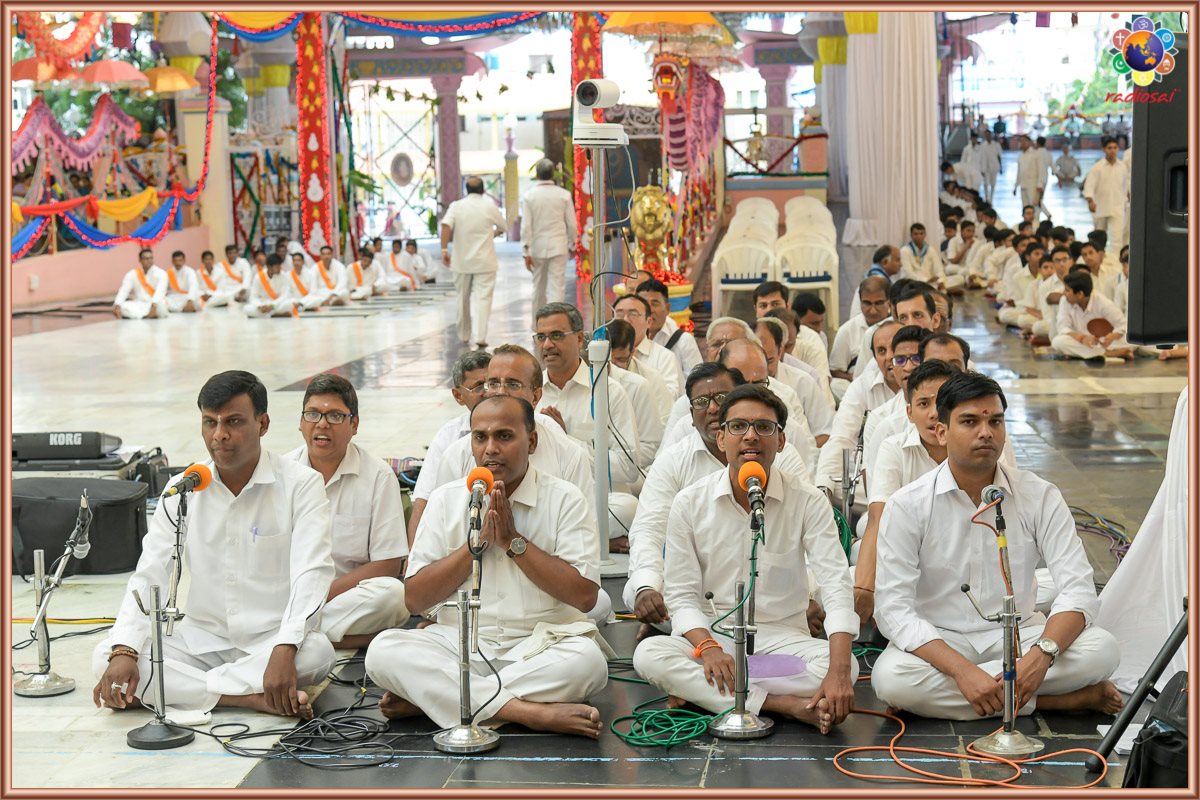 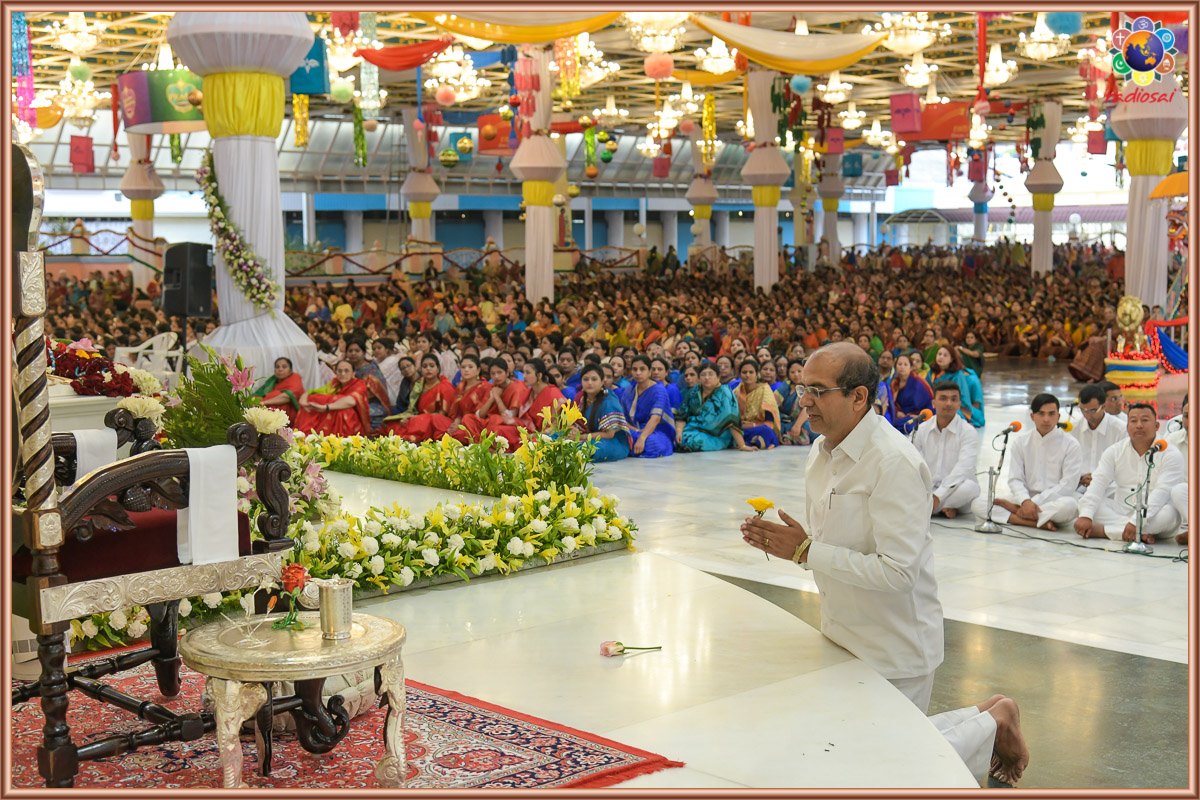 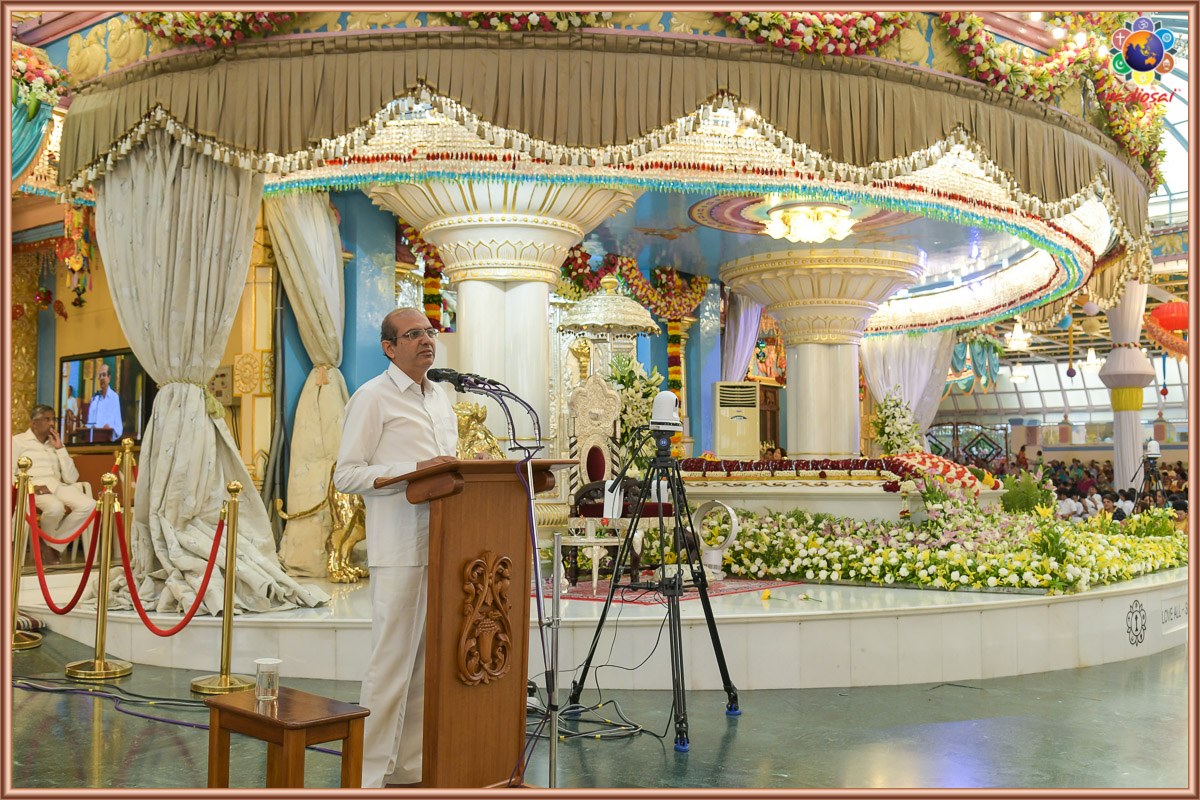 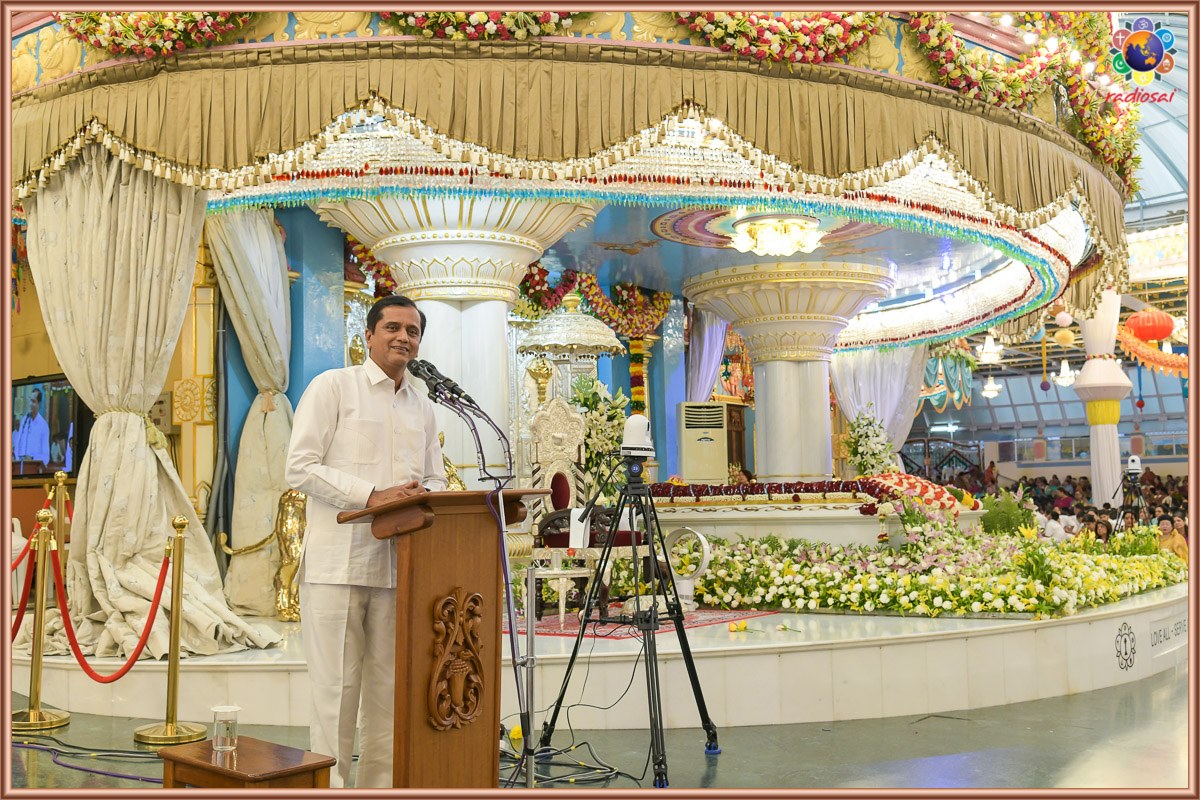 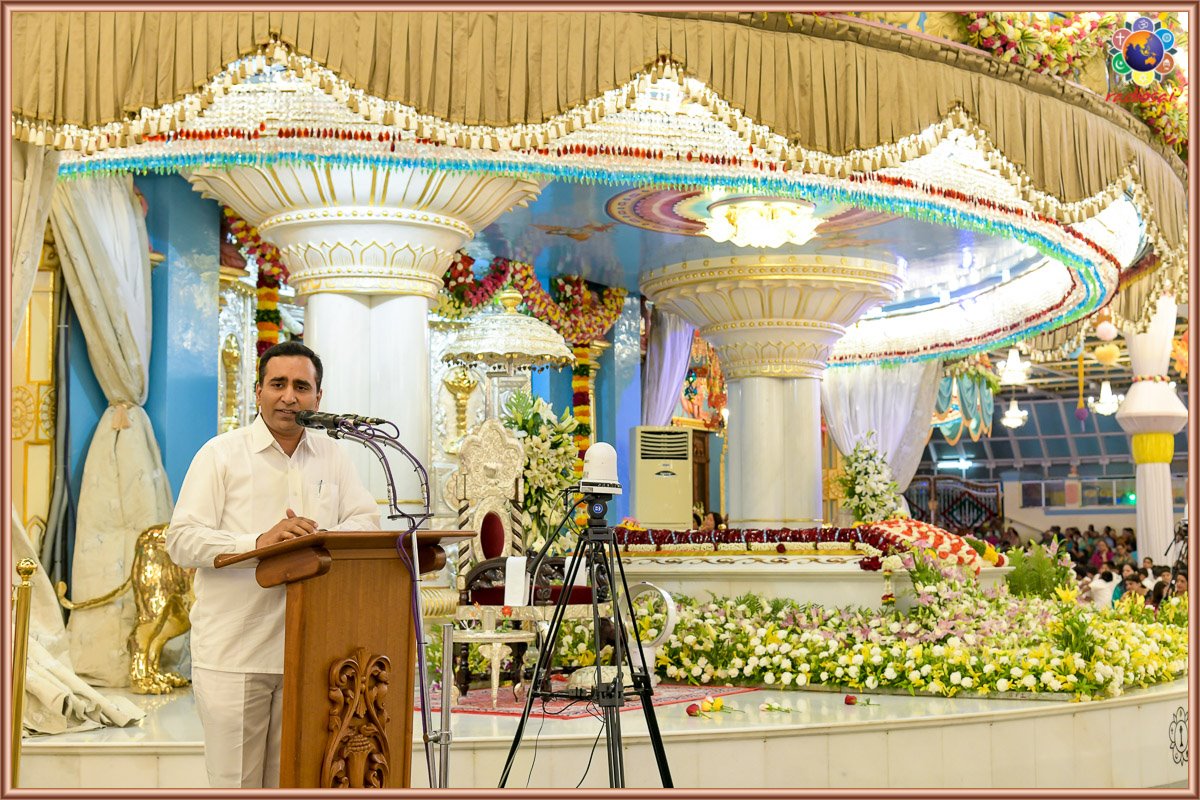