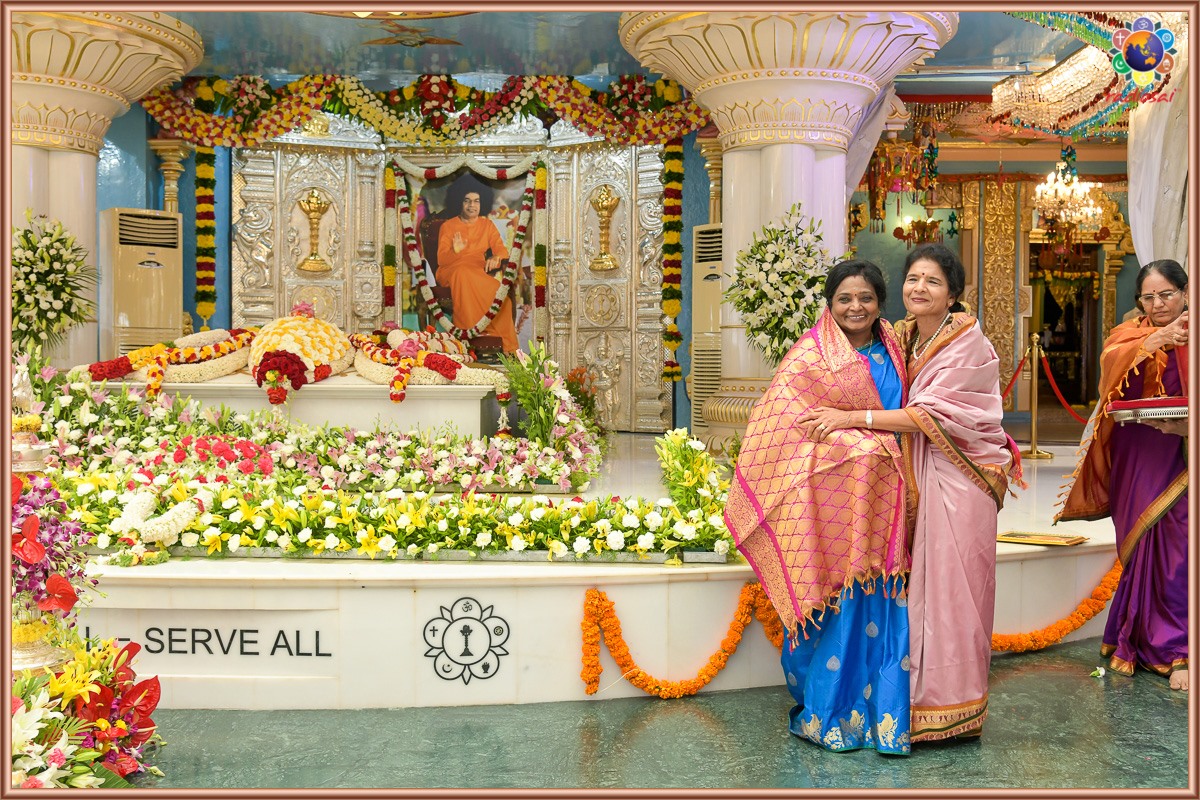 November 19 is Ladies’ Day in Prasanthi Nilayam and for the Sai fraternity all over the world. Ever since its inception in the year 1995 at the direct instance of Baba, calling for greater women participation in social, spiritual revolution in their role as feminine energy, November 19 has been the dotted day in the Prasanthi Calendar when womenfolk comes active celebrating the day in Baba’s incomparable Divine Presence.

As has been the tradition over the years, the auspicious morning today burst into day-light singing aloud ‘Sathya Sai Suprabhatam’, invoking The Supreme Purusha.

Truly, Prasanthi Nilayam is living His message, reminding the mankind and the creation at large of the Final Goal, that being to transform into Prema Prasanthi Nilayam. How beautiful is the message of Swami’s little ones who are nothing but reflections of His Pure Love!!!

A ceremonial procession from the Yajur Mandiram comprising Vedam, percussion and university band from SSSIHL set the tone for the morning celebrations at 0810 hrs. A brief spell of the percussion music by the SSSIHL band next was followed by an invocatory Veena recital by Ms Shobana Swaminathan, an accomplished AIR artist from Chennai. Ably assisted by mridangam and ghatam accompaniment, Ms Shobana’s repertoire for the morning included ‘Bho Shambho Swayam Bho…’, ‘Aigiri Nandini…’, propitiating Mother Divine, Harivarasanam… that of the Lord of famed hill shrine at Sabarimala, to name a few.

Welcoming the august assembly and the chief guest for the day, Dr. (Mrs.) Tamilisai Soundarajan, Hon’ble Governor of Telangana, on behalf of the organising committee Prof Rajeshwari Patel recollected the initiation of ‘the special day’ at the direct instance of Baba with His Divine Vision aimed at augmenting women empowerment. Referring to some of the national initiatives on women empowerment, the speaker reminded the audience that it was Baba Who did it first, by establishing the first of His educational initiatives, establishing a college for women, decades ago.

Known for her intense faith and devotional practice, Ms Isabella Chu, a Permanent Judge from Hong Kong, speaking next highlighted on the present situation in her country, facing with public agitation. Duty bound as an emergency duty judge dealing with civil crimes related to the protest, the speaker claimed she is fearless in discharging her duties, as Swami Is her Guide. With His Grace all impossible become possible, said Ms Isabella narrating her experience of winning the most impossible, a samadhi land for her father in her land, first of its kind, as wished by her father. This was possible with prayers to Baba letting go with surrender, sounded the speaker, who has been a permanent face in Prasanthi Nilayam from the recent past. Take the short cut to Puttaparthi and get charged, advised the speaker as there is so much one can do with Swami as Baba is waiting here to grant us Darshan.

Following her devotional pathway in SAI, Ms Isabella has learnt Rudram in a ‘record’ one month and was the leading chanter for the Ati Rudram conducted in Mount Kailash and elsewhere.

Calling herself a humble devotee of Baba, Hon’ble Governor of Telangana in her Chief Guest address spoke of her ‘touch of grace’ with Baba, narrating her first telling experience at the hands of Baba, Who, once miraculously healed her sore throat in a trice, in the nick of time. After several failed attempts to come to Prasanthi Nilayam as an ordinary devotee she has finally come to the holy Abode today, as the Governor of Telangana, claimed the Governor, crediting the same to Baba’s Will. A medico by profession, the Governor was full of praise for the ‘No Billing’ practice at the super speciality hospitals which is much against the ‘medical business’ prevalent all over today. Coming to Swami’s hospital burden of patients are getting relieved, reminded the Governor. As a politico, as a medico, and at all walks of life, the Governor said that she has always been guided by Baba’s teachings, which often comes to her aid in dispelling any confused situation. We will be the strongest personalities in the world, none can shake us as Baba is there to guide us, exhorted the Governor, advising the audience to be happy and courageous. The Governor, as  a devotee of Baba, used to visit ‘Sundarm’ at Chennai regularly every Thursday.

Earlier, after arriving at the venue, the Governor paid obeisance to Beloved Baba at the Sanctum Sanctorum. She then officially lit the lamp, marking the official opening of the Ladies’ Day programme.

Earlier, Ladies’ Day Committee member Dr (Ms) Neelam Desai introduced the chief guest for the session. Dr Sayali Karande from Mumbai took the honour of being the Master Of Ceremonies.

Baba’s Divine discourse followed next, played on the public address system. Swami emphasised on the importance of the day, as He Willed It, which will have its telling impact in times to come.

Bhajans continued and the session concluded with Mangala Arathi to Baba at 1040 hrs. 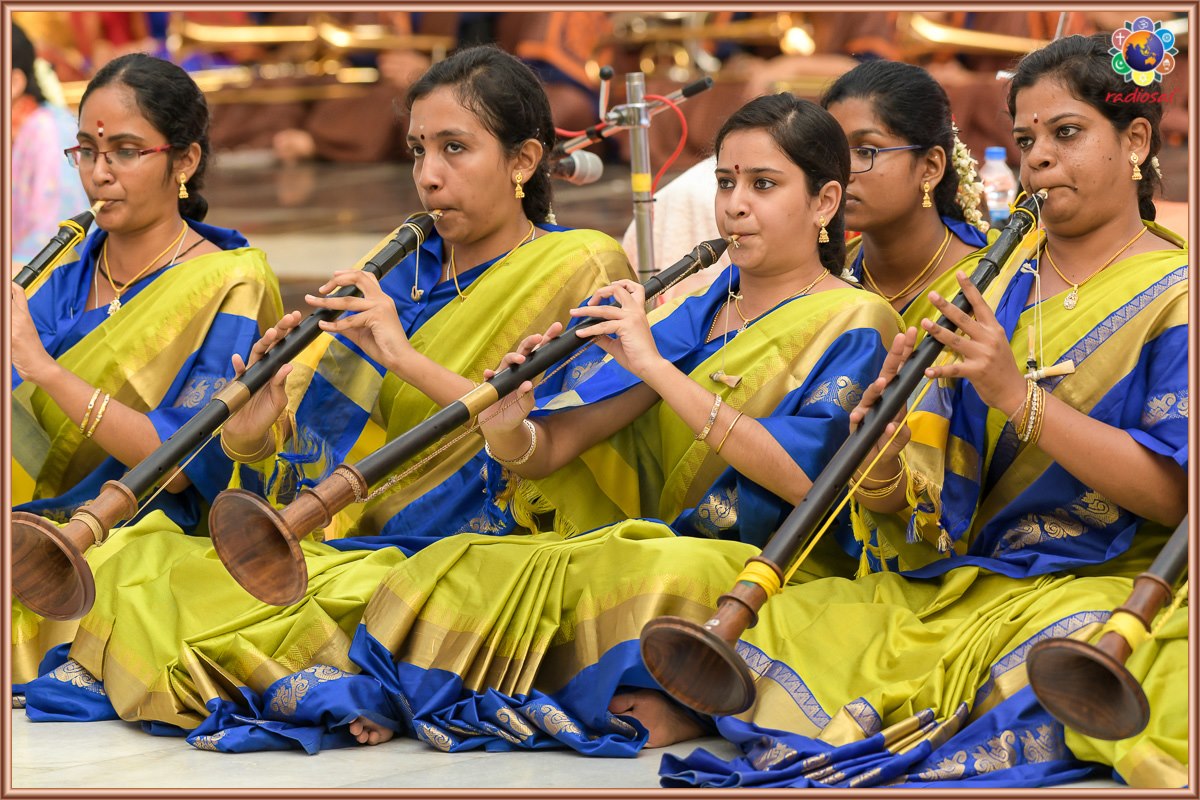 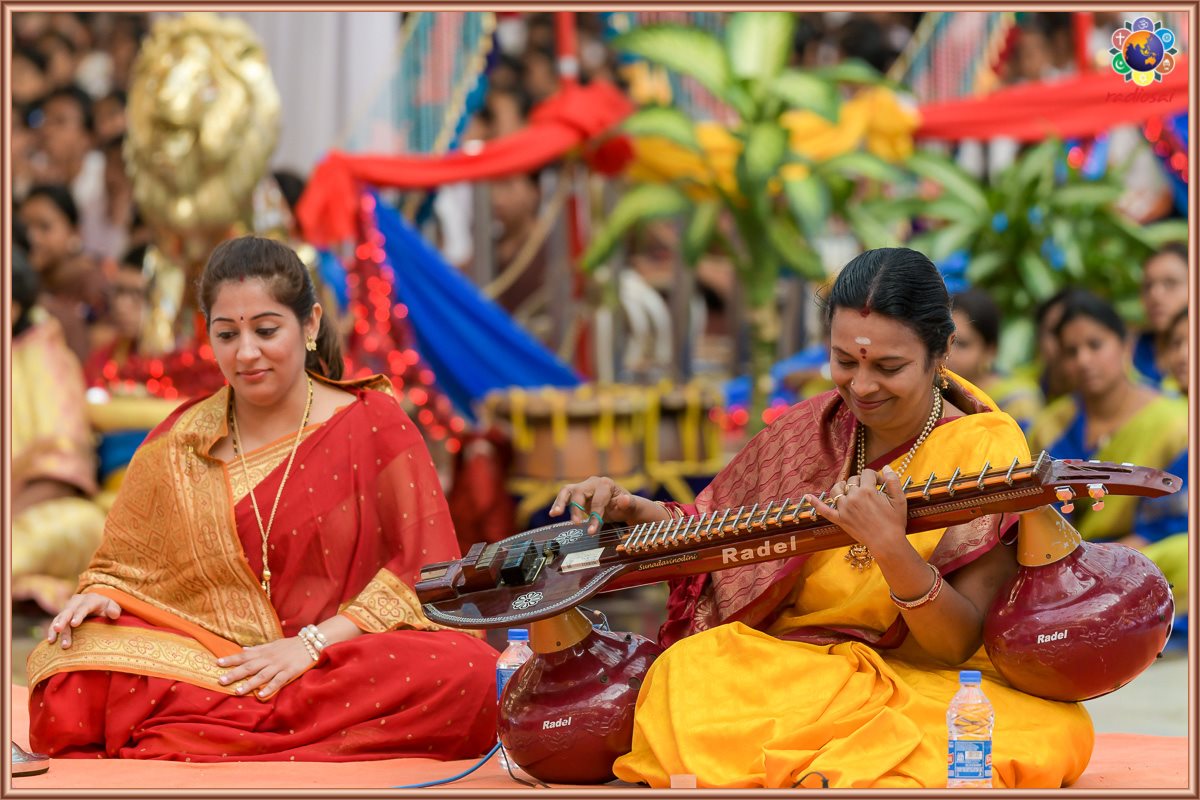 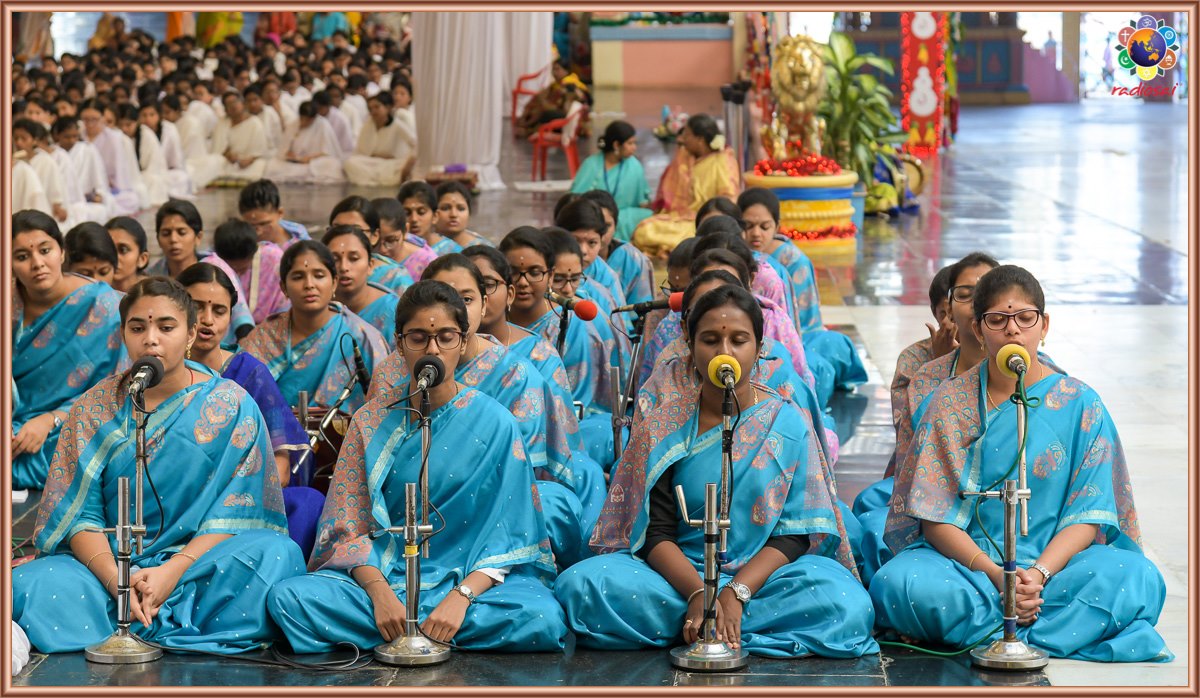 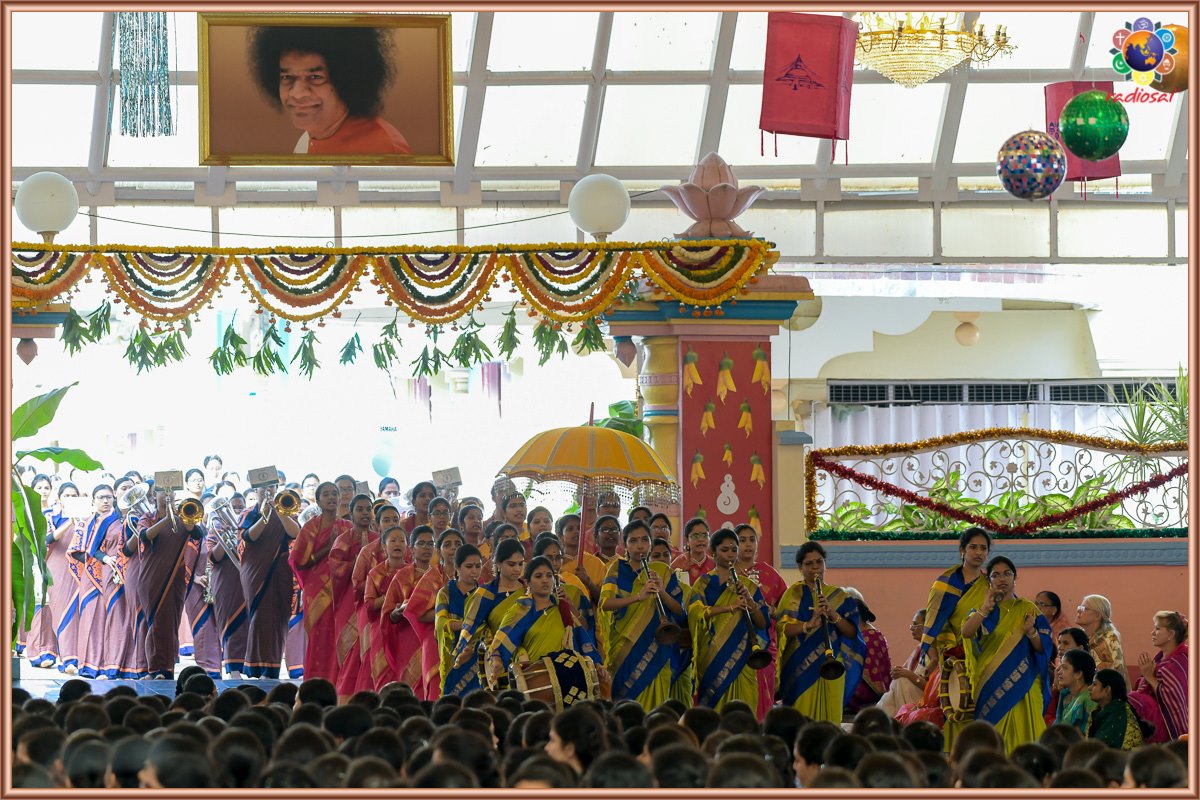 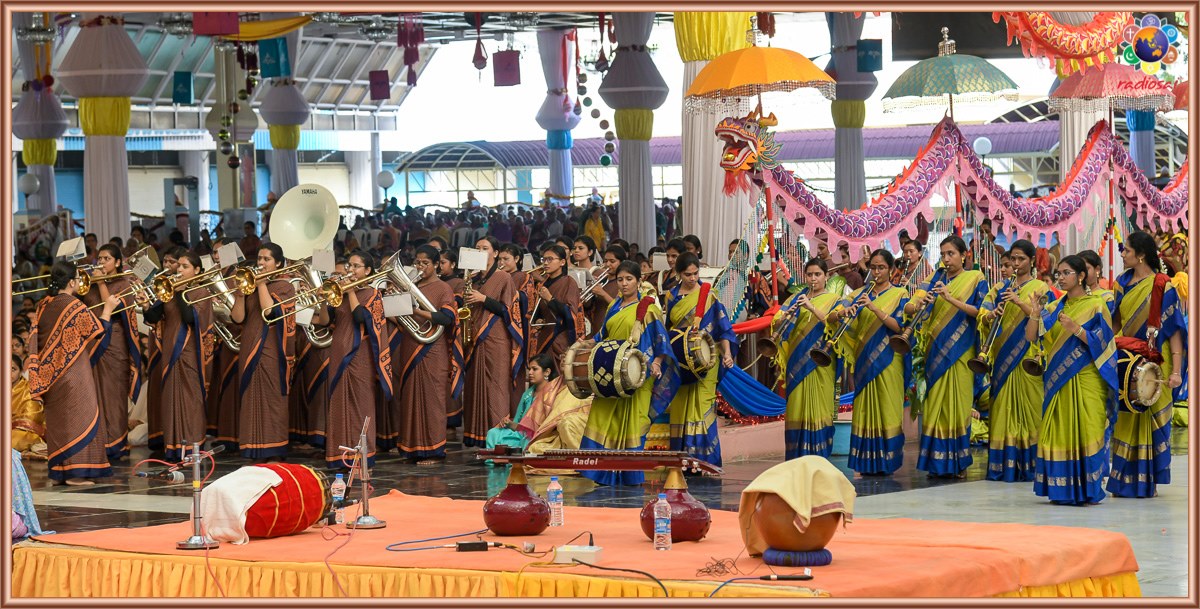 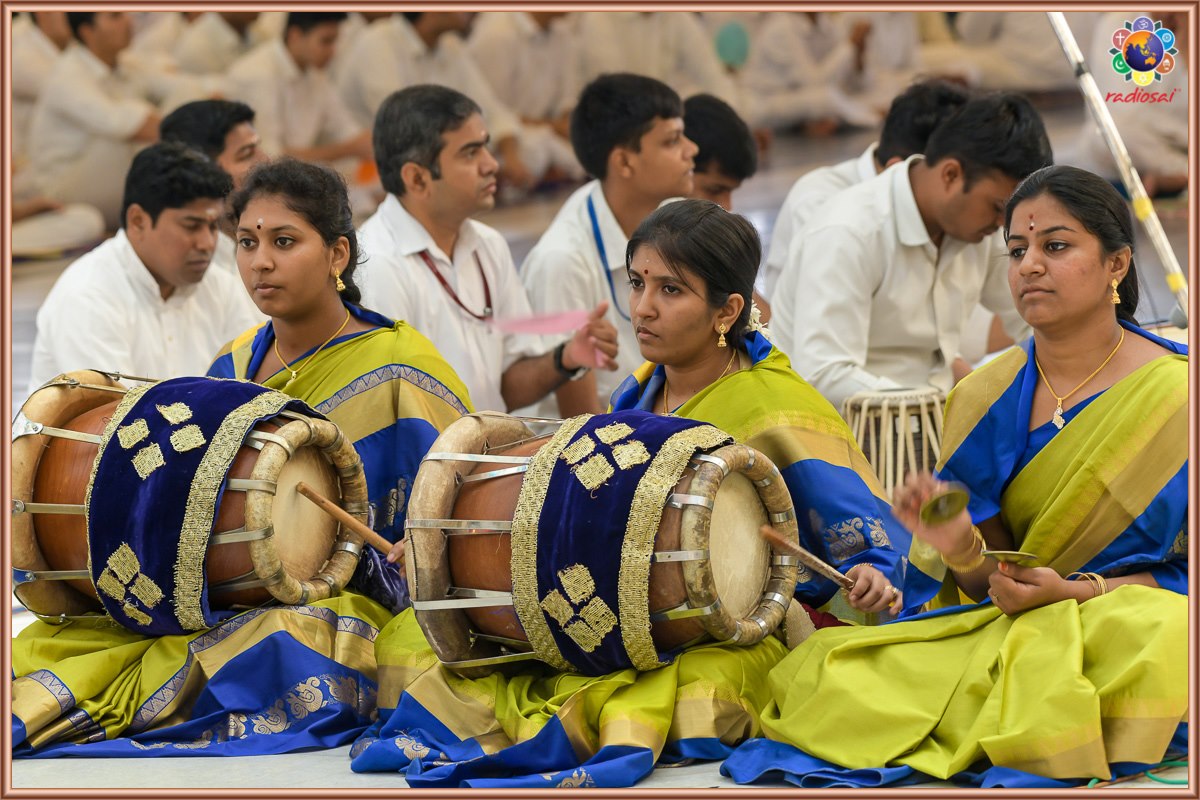 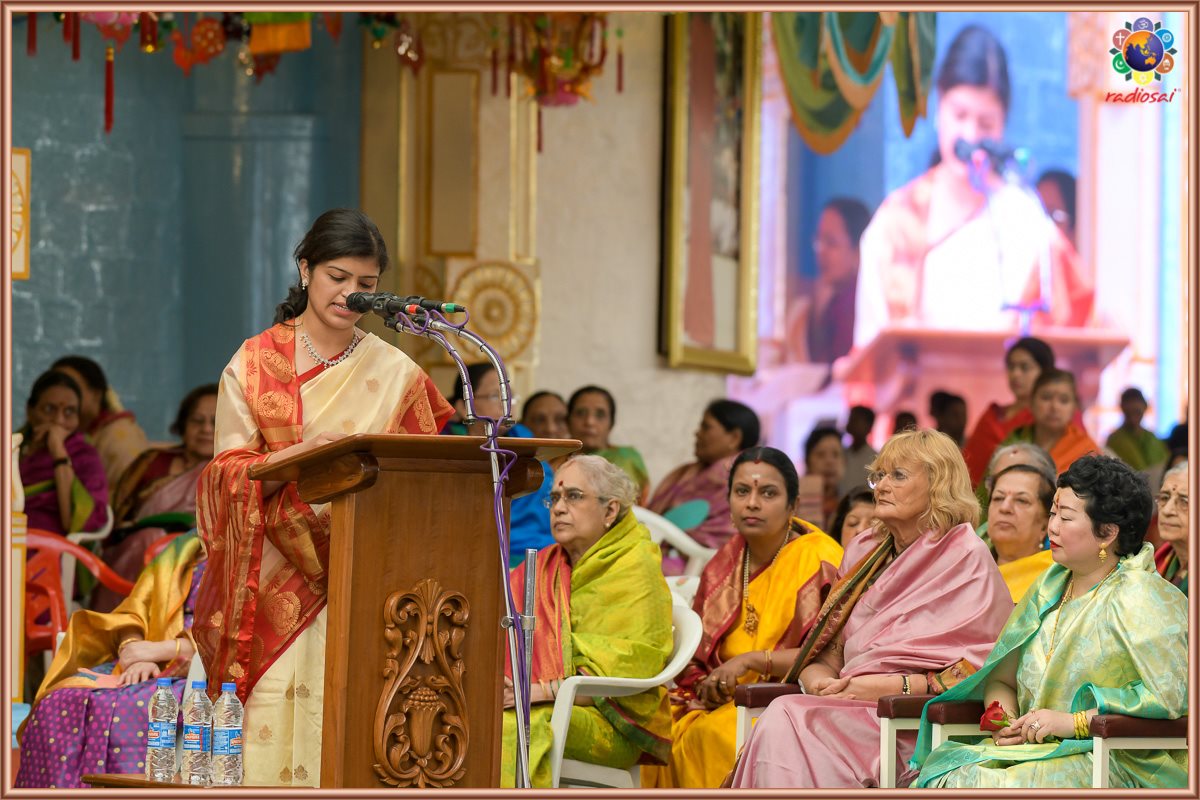 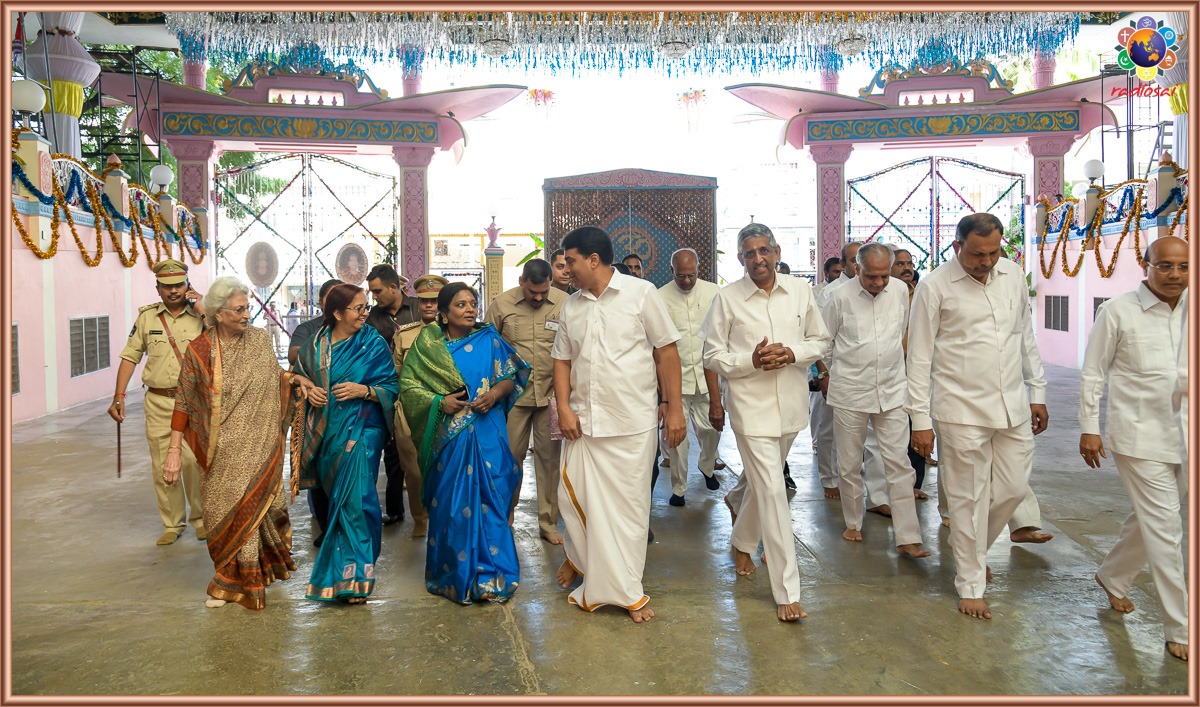 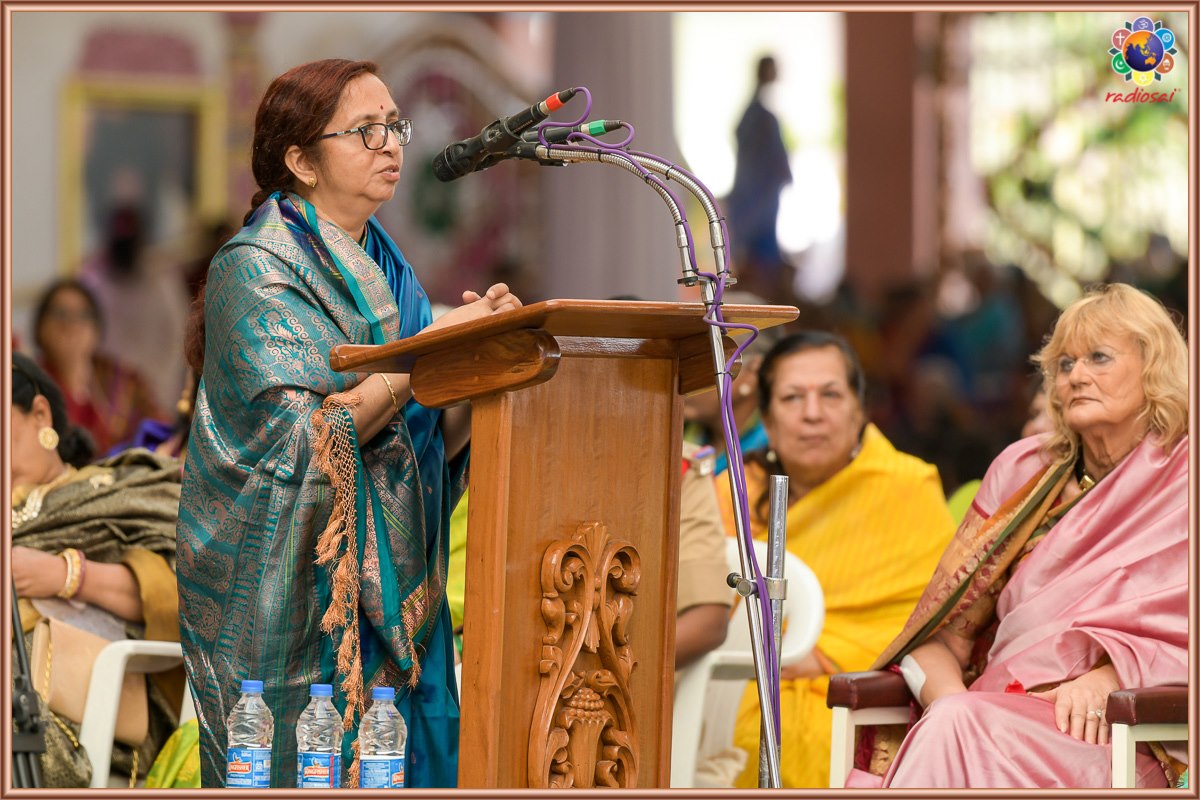