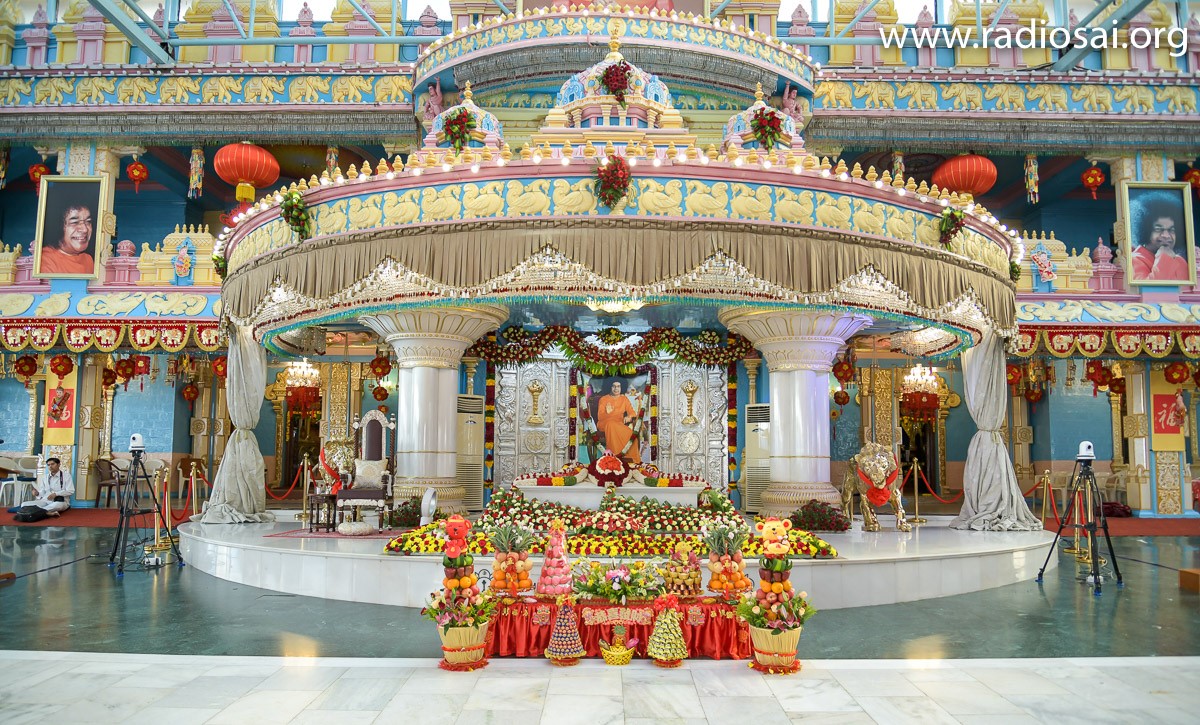 Filial Piety is an overriding theme in the Chinese tradition that finds its way every year in the immediate Divine OmniPresence Of Bhagawan Sri Sathya Sai.

Celebrating the Lunar ‘Chinese’ New Year – 2020, over 500 devotees from four Southeast Asian countries, Indonesia, Malaysia, Thailand, Singapore, along with Hongkong from East Asia, presented a solemn cultural evening here in Prasanthi Nilayam today. The Prasanthi CNY celebrations coincide with the new year celebrations back in the Chinese speaking nations. Based on Chinese astrology, each New Year is associated with an animal sign, occurring in a 12-year cycle. Chinese New Year 2020 is that of Rat.

The session this evening commenced at 1700 hrs with the lighting of the lamp by the organizers that was followed by traditional offerings by eight immortals, joined by Chinese God Of Wealth Tsai Shen. The Eight Immortals are high exalted beings, who, with their strict adherence to spirituality, transcended from human to Divine. Women representatives from the participating countries followed suit with traditional offerings.

Mr. Billy Fong, Chinese New Year Coordinator from Malaysia, then delivered the welcome address, stressing on the supreme significance of the priceless Chinese tradition of Filial Piety. Citing the immediate threat that is plaguing mainland China from the deadly Coronavirus, the speaker emphasized the need for the practices of Filial Piety. Humanity is ignorant of its primary duty of love and reverence to parents, reminded Billy quoting Bhagawan. In conclusion, he made a fervent plea to devotees en masse to pray for the Chinese, freeing them from the deadly Corona havoc. Billy Fong is currently the Regional Coordinator for Zone 4 B of SSIO.

A brief instrumental offering followed next, presented by Ms. Paramita Putri Santoshi from Indonesia, who was graceful on Guzheng, a Chinese plucked string instrument with a more than 2,500-year history.

Ms. Latisia Lao from Indonesia next spoke on the importance of Filial Piety from the perspective of Buddhism. Her speech revolved around the many beautiful Buddhist scriptural references on the subject, Filial Piety. Quality parental influence with strict adherence to values following the Chinese and Buddhist tradition helped her, along with her siblings, to grow in virtues.

Dang Ni Lou Ler’ (When You Are Old) ‘Bian Lian’ – Changing Faces, a song offering by Mr. Fendy, an international singer from Medan, Indonesia was the next presentation, who, with his booming voice aired the invaluable theme of Filial Piety most beautifully.

How life becomes meaningful with Sai, the speaker next, a young adult from Malaysia, spoke on the topic, revealing her inspirational journey with Sai. Born with a congenital disorder connected to the spinal cord, she was never a healthy child, having had to face the hard facts of life. Speaking with immense gratitude, the speaker said, ‘Swami knows me better than I know myself,’ narrating how she earned her confidence in life, after bumping into the book, Life Is Love, Enjoy It. Doing seva is my medicine, said the speaker, reflecting greater confidence in facing the oddities of life, with Swami ever with her. In conclusion, the exuberant and energetic young adult expressed her gratitude to Bhagawan and her parents, a true reflection of Filial Piety.

Hymns dedicated to Goddess Of Mercy, Kuan Yin, Avalokiteswari, followed next before a bout of ‘Chinese – Prasanthi Bhajans’ by the devotees from Singapore. Occupying the evening regular bhajan slot, the group enthralled Bhagawan and the audience in full with their devotional singing.

The Chinese New Year celebrations had its inception in Prasanthi Nilayam in the year 1997, and ever since, it has been a regular feature in the festive Prasanthi calendar.

The celebrations will continue on day-2 tomorrow, featuring both morning and evening sessions. 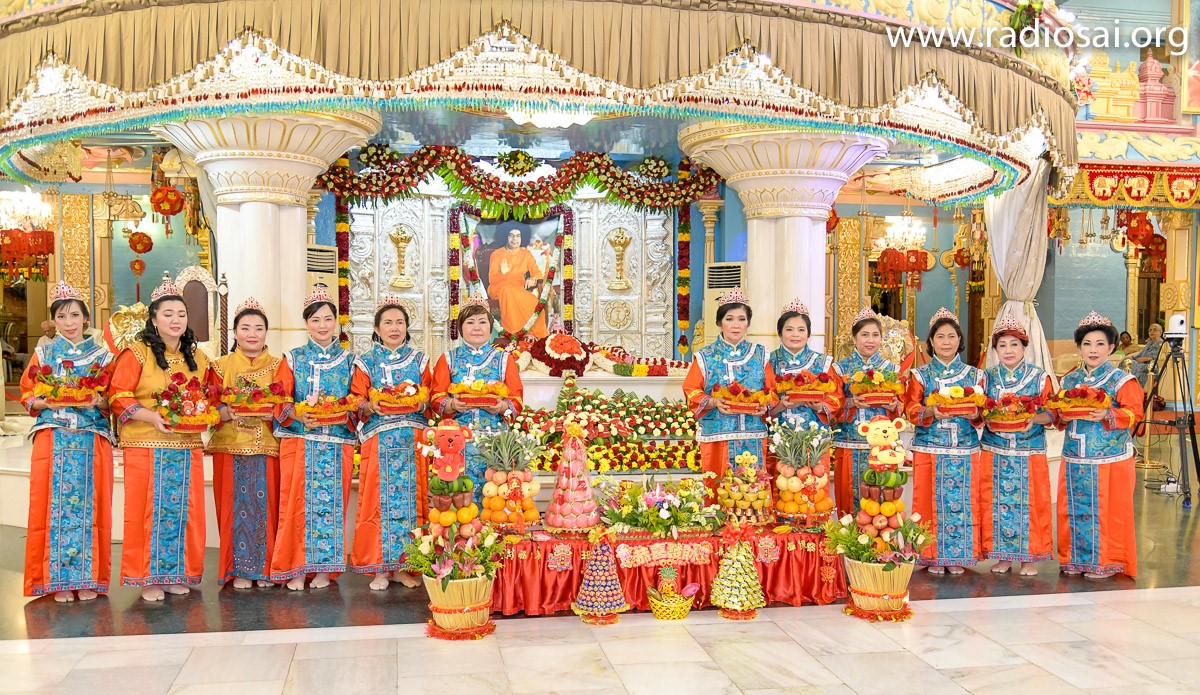 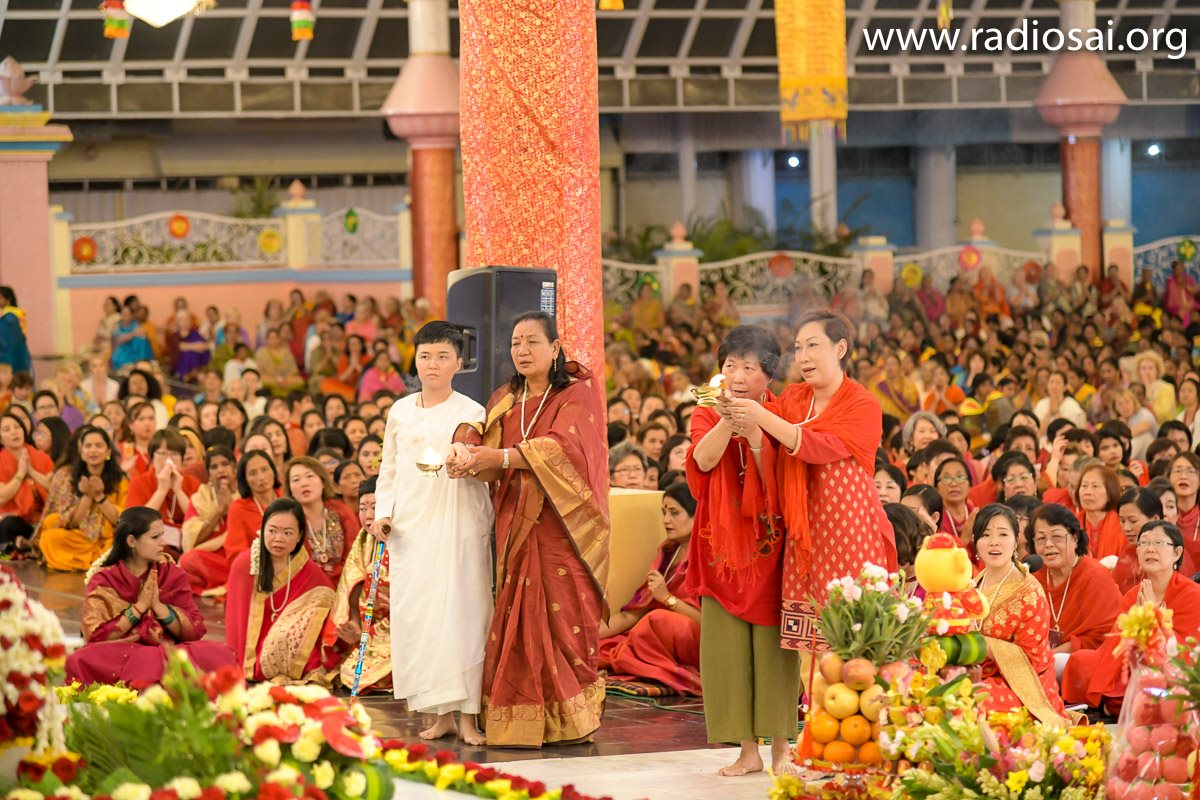