The Message of Easter – Love, selflessness and sacrifice.

At this sacred time of Easter, we remember Lord Jesus Christ with love and gratitude. He demonstrated through His life, death and resurrection, the path of love, selflessness and sacrifice.

Bhagawan Sri Sathya Sai Baba held up Jesus Christ as an example for all. Baba taught us that God is love. He said that since God is love, love is the path to God.

Love alone can reveal the Divinity latent in all. Love is God. Live in love. Love lives by giving and forgiving; self lives by getting and forgetting. Love is selflessness; selfishness is lovelessness. Do not waste your life pursuing the narrow interests of the self. Love! Love! Become what you truly are—the embodiments of love. No matter how others treat you or what they think of you, do not worry. Follow Jesus Christ.

Sathya Sai Baba also taught us that love is selflessness, and that the hallmark of love is sacrifice:

The hallmark of love is tyāga (selfless sacrifice). Love seeks nothing from anyone. It bears no ill-will towards anyone. It is utterly selfless and pure.

Two thousand years ago, the same love that incarnated as Sathya Sai took birth in Judea as Jesus of Nazareth to teach mankind the principles of love and sacrifice. Out of love for humanity, Jesus willingly and selflessly sacrificed His own life, showing no ill will to those who tortured and killed him. Instead, He prayed to God His Father to forgive them, because they didn't know what they were doing. Through the radiant love He showered on all, even those who crucified Him, Jesus showed himself to be one of the greatest embodiments of love who has ever walked the earth.

Easter is the time when Jesus made the supreme sacrifice of offering His own life so that those who believe in Him would be freed from their sins, their karma. The festival of Easter commemorates this loving sacrifice which Jesus made for all mankind through His crucifixion and death. It also celebrates the triumph of love over death that was His resurrection. It is a time for gratitude for the Grace that has been bestowed on us all, and for reflection on how we are putting the teachings of Jesus into practice in our own lives.

Sathya Sai Baba, in His discourses, has beautifully recounted the story of Jesus and the true significance of Easter. The story begins on the night before He was arrested and crucified. Jesus had a last supper with His disciples. He shared bread and wine with them, telling them that the bread represented His body and the wine His blood, which would be 'poured out for many, for the forgiveness of sins' (Matthew 26:28). Sathya Sai Baba tells us that the spiritual meaning behind the bread and wine was that all beings alive with flesh and blood are to be treated as Jesus Himself, without dividing and distinguishing some as friends and others as foes. Bread and wine were common items that everyone lived on at the time and so every body sustained by bread and every drop of blood in the veins of every living being was to be seen as His. In essence, the message was that every man is Divine and was to be revered as such.

The events of Easter

Sathya Sai Baba has also narrated the events leading to the crucifixion of Jesus. Baba's words highlight the incredible courage, selfless love, sacrifice, forbearance and forgiveness that Jesus demonstrated throughout His ordeal. Baba tells us that the temple priests believed that the teachings of the Jewish prophets were valid for all time and that what Jesus taught was wrong. But Jesus had found that the true essence of the Jewish religion had been obscured by centuries of rituals and scholarly interpretation. He taught both spirituality and morality in order to make clear the path to God. Jesus found that God's Grace was being commercialised in the temple and so He condemned the priesthood who tolerated and encouraged this. This drew upon Him the anger of the priests and they tempted Jesus' disciple, Judas, to betray Him for 30 pieces of silver.

These priests then told the Roman rulers of Judea that Jesus was trying to proclaim Himself as King and that he was therefore guilty of treason. Their insistence made Pilate, the Roman governor, order His crucifixion. As Jesus was being crucified, He heard the voice of His Father saying "All life is one, My dear Son. Be alike to everyone," and He pleaded that those who were crucifying him may be pardoned for they knew not what they did. Jesus knew that everything happens according to God's Will, so even while He was in agony on the cross, He bore no ill will to those who crucified Him. Jesus sacrificed himself for the sake of mankind.

Thus Sathya Sai Baba has shown us that the true significance of Easter is the love, selflessness and sacrifice of Jesus. Even when He was dying, Jesus' only thought was for the welfare of others, even those who had harmed him. His selfless love and sacrifice, His fortitude and forgiveness are an example for us all today.

Sathya Sai Baba spoke about Jesus with great love on many occasions:

Jesus was a Master, born with a purpose, the mission of restoring love, charity and compassion in the hearts of men. He had no attachment to the self; He never paid heed to sorrow or pain, joy or gain. He had a heart that responded to the call of anguish, the cry for peace and brotherhood. He went about the land preaching the lesson of love and poured out His life as a sacrifice for the upliftment of humanity.

Jesus taught simple practical lessons in spiritual advancement for the good of mankind; He manifested Divine Powers to instil faith in the validity of His teachings; He marked out the path that can confer on men the sweet nectar of Ananda (Bliss). He exhorted people by precept and example to cultivate the virtues of charity, compassion, forbearance, love and faith. These are not separate and distinct qualities, they are only the many facets of the Divine Man, which he has to recognise and develop.

Jesus was honoured by the populace as Christ, for they found in his thoughts, words and deeds, no trace of ego. He had no envy or hatred, and was full of love and charity, humility and sympathy.

Sathya Sai Baba speaks about Christ in an Interview

On 27 December 1989, Sathya Sai Baba called me for a private interview, along with one of the other young adults in our group. He ushered us into the private interview room and sat down in His chair. We sat down at His feet and I offered a Christmas card that I had made for Him. Baba took it, smiled at me and asked, "Any questions?" 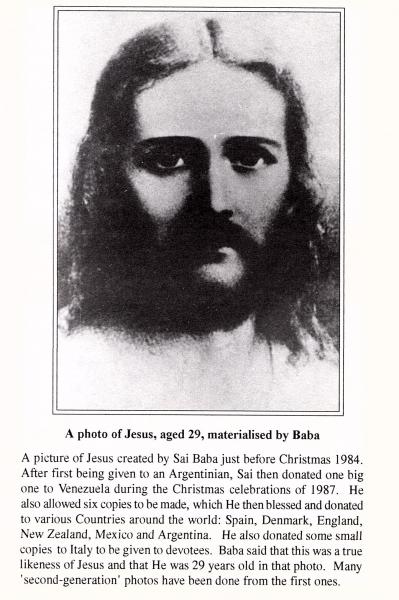 I remembered that Baba teaches that there is only one religion, the Religion of Love. However, being from a Christian background, I had been taught that Jesus is the only way to God. So I asked Him, "Jesus said, 'I am the Way, the Truth and the Life. No one comes to the Father but by Me.' How are we to explain what that means?"

Baba did not answer the question directly. Instead, He spoke about Jesus Himself. He said, "Jesus was very, very, very pure. He was God descending as man and man ascending to God. He was the son of God." While He was saying this, Swami held up His right hand pointing down and then overlaid it on His left hand, which was pointing up. Taking in what He had said, I then asked Baba, "So Jesus was both human and Divine?" Baba answered, "Yes, Daivamsa" (a part of the Divine). He smiled at me and sat back in His chair.

I reflected deeply on what Baba said to me. Jesus was born into the Jewish religion and its symbol is the Magen Dawid or Star of David. The Star of David is composed of two overlapping triangles, one pointing down and the other pointing up. This represents what Swami told me about Jesus and what He demonstrated with His hands. The triangle pointing down represents God descending as man and the upward triangle represents man ascending to God.

After the interview, I also meditated on Jesus' statement, "I am the way, the Truth and the Life" and what Baba had said in response to this. Reflecting on Baba's words I came to the following understanding of this statement:

Jesus did not think of Himself as just being the body called Jesus. Jesus referred to His body as the 'Son of Man'. Of Himself He said, "I am the Son of God" and later "I and My Father are One." As Baba had told me, "He was God descending as man." Jesus saw Himself as God.

The next question that arose was, "What did Jesus teach His disciples about God?" The answer is given by Saint John as was mentioned earlier: God is love. (1 John 4 16). There is no doubt that this is what Jesus had taught John and that this is why John devoted the rest of his life to Love.

Love is the Way –Love is the path to God. Since God is Love, to merge in Him we must become Love:

Those who have recognised My Love and experienced that Love can assert that they have glimpsed My reality, for the path of Love is the royal road that leads mankind to Me.

Love is the Truth. Sathya Sai Baba once told me in an interview “If you search for Truth you search for God. There is no difference.” Again, while I was at the World Education Conference in 2008, Baba told us:

Love is truth and truth is love. Live in love.

So love is the Truth.

Love is the Life. Baba tells us:

So everything that has life is a manifestation of the love that is God. This means all of us are also that same love, that same Divinity!

Since God is love, love is the way to Him, the truth of Him, the life He lives through all beings; and the only way we can come to Him is through love. Not only is the path to Him love, the one who walks the path is also the embodiment of love! At Easter, we pour out our love to celebrate the selfless sacrifice of Jesus, the embodiment of love and compassion. Since we are love and He is love, in truth this celebration is love worshipping love. Jesus demonstrated through His life that the essence of love is selflessness and the proof or hallmark of love is sacrifice.

This Easter, may that Sai who is love, reveal to us all the love that is our own True Nature.